As many photographers I have been drawn to shoot the lights. And living in Iceland will give many opportunities to shoot them.  They require  to go out and take photographs late at night in the cold weather. You quickly forgot the cold once they appear in the  sky.

Some people say they can hear a sound when they appear  ? Well sometime in a  relay calm weather I sometime think I can hear them. A sound  like electric humming ? imagination.? probably

An aurora, sometimes referred to as a polar light,  a natural light display in the sky, predominantly seen in the high latitude (Arctic and Antarctic) regions. Auroras are produced when the magnetosphere is sufficiently disturbed by the solar wind.

The trajectories of charged particles in both solar wind and magnetospheric plasma, mainly in the form of electrons and protons, precipitate them into the upper atmosphere (thermosphere/exosphere). 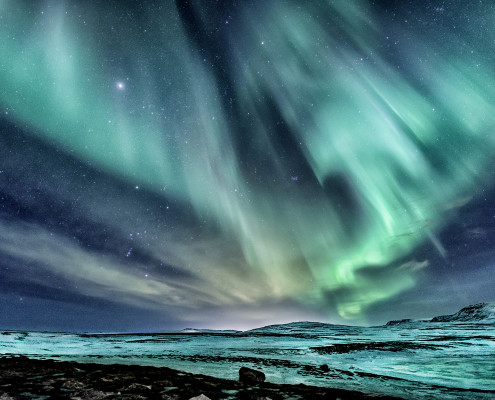